I didn’t go to Comic-Con this year, but I still managed to engage in plenty of geek gawking, zombie watching and celebrity sighting. I went to a happy hour party hosted by my favorite show on Comedy Central, Workaholics. It was at Float, the roof-top, poolside club at the Hard Rock Hotel. It was on Friday afternoon, so I developed a 24-hour flu and got in line solo at 1:30.

As with most things related to Comic-Con, it was a long line, and there was no guarantee I’d even get in. It would have been super boring standing in line except for the endless parade of cosplayers, some dude in a DeLorean, and Shaq rolling past in an Escalade. My phone was fighting the other 200,000 phones for a signal and I couldn’t get on Facebook, twitter, or even send texts while I was in line. Within a few hours, my fully-charged battery would be totally dead.

Thankfully, my battery held out through the Workaholics party, and I got pictures with Uncle Blazer, Ders, and Adam. Since I was flying solo, I had no choice but to engage in conversation with other people,  so I’d have someone to take the pictures for me. I met a young couple who didn’t seem like they’d try to get me into some weird furry three way, and agreed to trade photography duties. They were adorably star-struck by the basic cable celebrities we were meeting, and I think if anyone more famous walked in, their heads would’ve exploded. That kind of enthusiastic fandom is probably the best part of Comic-Con. Well, that and the hosted bars.

So here are the photos of me and the guys from Workaholics. 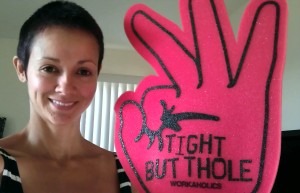 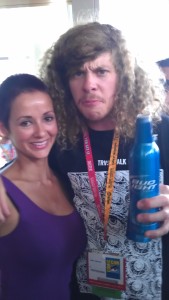 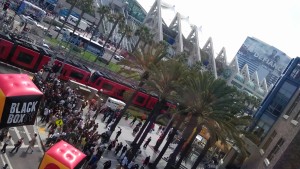 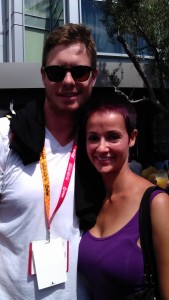 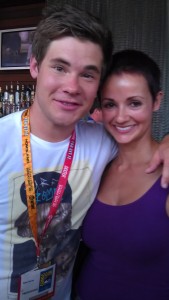