It was the ’90s. Colors were brighter, food tasted better; the future was something we looked forward to, not a doomed hell scape we prepared for by buying 20 pound buckets of freeze dried food from Costco. You may find this hard to believe, but at the time, NBC had some good sitcoms! Among them was 3rd Rock From The Sun, which aired from 1996 to 2001.

How ’90s were things in the ’90s? Well, the 3rd Rock theme song is by Big Bad Voodoo Daddy, a zoot-suited swing revival band. If the movie Swingers wasn’t still available for streaming on Amazon, I wouldn’t believe that the whole swing revival really happened. Bands with horn sections, guys wearing suits, and learning to dance?! That’s got government-spiked-the-water-supply-with-mind-control-drugs written all over it.

The premise of the show was that a team of alien explorers comes to Earth to pose as a normal human family to study life on this planet. Dick Solomon is the leader of the crew, the High Commander, posing as a middle-aged, widowed college physics professor. Dick is joined by his young son Tommy, his hot, 20-something sister, Sally, and the odd odd-man-out, Harry. Harry serves as a human transmitter, going into a trance to relay messages from their boss on the home planet, The Big Giant Head.

3rd Rock won a crap load of awards during its six year run, and with good reason. The show managed to pull off everything from the absurd physical comedy of pies-in-the-face to ambitious Fellini homages. 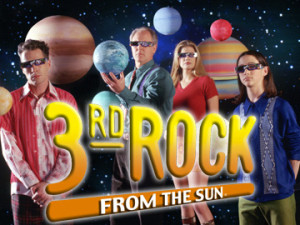 The whole series is available for streaming on Netflix, and has aged very well. Except for the fashion, which is already cycling back around. Choker necklaces, crop tops, and baggy pants only worked back then because everyone was high on the great economy and Zima. Please, let the past stay in the past.