The Eric Andre Live Show is coming to downtown San Diego during San Diego Comic Con 2013. On Saturday, July 20, Adult Swim is bringing a live version of the bizarro talk show to the House of Blues in the Gaslamp District.

In addition to host Eric Andre and co-host Hannibal Buress, the live show will include a DJ set by Los Angeles electro-pop duo, Yacht. Beyond a very loose talk show format and the music, it is difficult to predict what to expect this Saturday night. Andre has been know to strip down, go up in flames, crash through desks, and rain burgers down on the audience. If you’re coming to the show after Comic Con, you may want to change out of your costume if it isn’t waterproof.

“We’re going to destroy everything. We interview fake George Clooney, fake Russell Brand, and we’ll have some surprises, ” Andre said.

Andre and co-host, Hannibal Buress are both experienced stand-up comedians, with Andre planning a show in Brooklyn this summer to commemorate reaching the ten-year mark as a comic. They will be doing stand-up at the American Comedy Co in the Gaslamp on Thursday, July 18. 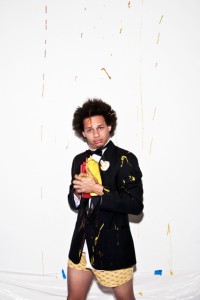 Photo by Gijs van der Most

In addition to the late night show on Cartoon Network‘s Adult Swim lineup, Andre was a regular on the ABC network’s “Don’t Trust the B in Apartment 23.” The show, edgy by prime time network TV standards, was recently cancelled. The Eric Andre Show on Adult Swim, however, is coming back for another season.

“We finished shooting, we’re editing now. We’ll be back in October,” Andre confirmed.

Andre is also a graduate of the Berklee College of Music, and collaborated with Yacht on a mixtape, Dr. MDMA, M.D., which is available to download on Soundcloud.