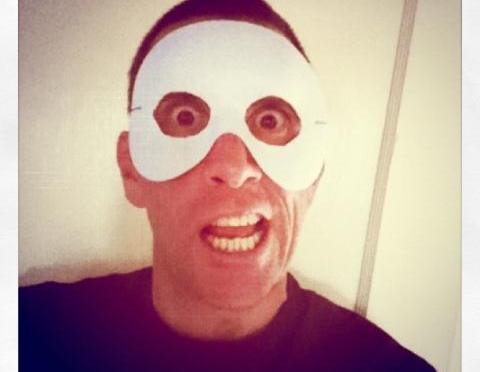 How do you paraphrase someone who has an awesome way with words? When I sat down and listened to the interview I recorded with Ben Johnson, I was stymied as to how to write it up. The man spits hot fire as Grammatical B, and growls furious ire with The Long and Short of It. Every quote is quotable. As intense and intimidating as he can be onstage, in person, Johnson exudes the easy calm of a person who has learned the art of self-acceptance.

“Haters have motivated me far more than people going ‘that’s really awesome’ in my life more than anything. But I don’t have those haters anymore. I’ve reached this pinnacle where I’m so not bitter anymore, and I’m so not angry anymore,” Johnson said. “It’s almost like this purging exercise. I talk crap to the microphone, and I don’t need to talk crap to that person.”

Johnson created the hilarious hip-hop philosopher, Grammatical B at the suggestion of friend Michael Periera, who was looking for a partner in crime for his own urban-themed alter ego, Microphone Mike. After collaborating on the song “Do Fries Come with that Shake”, Grammatical B became a standalone project.

Johnson recorded an album and videos with blood, sweat, and karma-in lieu of a big budget. An extended family of friends, fans, and relations appear in the video for “Rules & Laws,” filmed at the Casbah, where Johnson has been manning the bar for 13 years. The song calls out every variety of pain-in-the-ass patrons that a bartender has to endure.

Johnson has been playing in bands for most of his life, and has seen the rise of technology re-shape the landscape of the music business. We all look back and laugh at MySpace as an antiquated social media platform, but it was built as an ideal way for artists to promote themselves to the world, for free.

“I’m so old school, I was calling people on the phone to book nationwide tours in 96’ and ’97.  And then you get the $400 phone bill, and you have to get the phone bill in someone else’s name. Then MySpace came out and bam, immediately, you save that phone bill money,” Johnson continues, “and for that shining moment of 3 or 4 years, it was this amazing thing. I can go to this town and…say ‘hey maybe you’ll like our band,’ and the kids say ‘yeah we like your band we saw you were coming to town and checked you out on MySpace, we’re coming to the show’. And then MySpace became basically porno light and no one paid attention to it anymore.”

When his tech-savvy collaborator Periera moved to New York City, Johnson found himself forced to learn a new set of DIY skills. Long gone are the days of hustling Ma Bell and stapling fliers all over town, Johnson is now embracing the possibilities of digital DIY.

“I went and got the cheapest recording program for Apple you can get, like Logic for babies…the barest bones thing you can get,” Johnson said, “Mike moving away forced me to get literate on the musical tip.”

Even though he’s taught himself to play more instruments, and learn more about recording and production, Johnson still struggles with vital skill for a musician: Shameless self-promotion.

Johnson has been nominated for San Diego Music Awards as Grammatical B for Best Hip Hop, and Best Hard Rock with The Long and Short of It. The public can vote on the website until Monday, July 25. http://www.sandiegomusicawards.com/#home